Mathematician and author Vernor Vinge popularized (and named) the notion that technological change grows exponentially.  He called the phenomenon “exponentially accelerating change” and wrote both scientific articles and popular culture fiction about the concept.  We have all heard statistics thrown around; such as the fact that your child’s IPOD has more capability than the computer on the Apollo mission that landed on the moon in 1969.  Or that we’ve developed more technology in the last 25 years than in the previous 10,000 years.

That concept certainly applies to home oxygen therapy.  Realize that there are still many industry pioneers living and, in some cases, working in the field that were around for the first oxygen concentrator.  It revolutionized home oxygen therapy, which previously had been primarily tank delivery—usually by an industrial gas company.  In the couple decades that followed, we saw the rise of the respiratory therapy profession and the utilization of their clinical teaching skills in the home setting.  We saw reimbursement go from next to nothing to the point where business owners became very wealthy.  And we saw reimbursement swing back in the other direction as well! 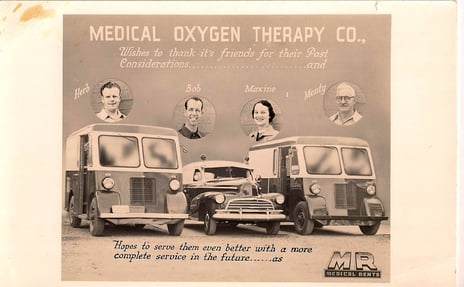 A typical DME delivery vehicle circa 1950’s. Many of these early DME organizations were operated by owners of ambulance services.

For “newbies” in the home medical equipment industry, it is useful and interesting to know a little bit about the history of home oxygen therapy.

Oxygen therapy in the hospital, sanitarium, and health facility settings was in widespread use by the 1930’s and 1940’s.  Patients with acute conditions were treated in hospitals.  Chronic conditions such as tuberculosis were treated in sanitariums.  Oxygen was still not readily available in the home setting.

Developments in the 1950’s set the stage for oxygen at home.  First of all, the use of the nasal cannula gave medical personnel an easy to use and non-invasive way to provide oxygen.  Because of this development, there was no need for invasive catheters, nor for oxygen tents, which were bulky and presented safety hazards.  Secondly, medical technology had advanced to the point where it was recognized that low flow oxygen (low liter flows such as 2 or 3 liters per minute) was reasonable, safe, and effective therapy for COPD patients.  Higher flow oxygen had hazards for COPD patients.  Higher flows also required larger volumes of oxygen.  Now, because of the use of lower flowrates for therapy, a reasonable amount of tank oxygen could be delivered to the patient’s home. 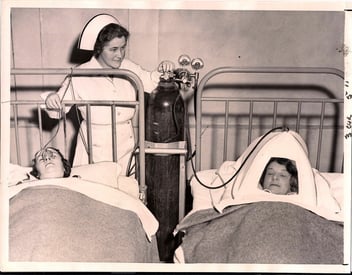 Comparison photo, 1948.  Probably done to graphically demonstrate how easy to use the nasal cannula devices were compared to oxygen tents, hoods, and catheters.  The development of the nasal cannula advanced the home oxygen therapy industry exponentially.

State of the art for home oxygen in the 1950’s and into the 1960’s was that an industrial gas cylinder company (the same companies that provided and delivered welding cylinders) would be contracted to deliver oxygen cylinders to a patient’s home.  The cylinders were stored in a shed, outside, or sometimes in a patient’s garage.  Oxygen tubing was run from the cylinders to the patient, who was often bedridden. There was no insurance coverage for home oxygen, and in most cases, the patient had to self-pay.

In the late 1960’s, the Medicare system began paying for oxygen for home patients.  This set off “copycat” coverage guidelines in private insurance companies and within state Medicaid systems.  By 1970, most commercial insurances, whether private or government, paid for home oxygen.  The first payment model for home oxygen was a mathematical formula based on volume.  Because the oxygen was delivered in tanks, a company would multiply the prescribed liter flow by the hours in a day by the days in a month and come up with a number for oxygen consumed.  This was translated to dollars and cents.  In some cases, with higher liter flows, oxygen could be reimbursed for several hundred dollars/month in 1960’s dollars.  DME companies thrived as this new, cottage industry was born.

In the 1970’s, a unique oxygen delivery system was developed for home use, which revolutionized home oxygen therapy. The oxygen concentrator was a large machine that filtered oxygen out of room air.  The machine was and is essentially a compressor that sucks air in.  The air is run through sieve beds that filter out nitrogen and other components, putting out relatively pure oxygen.

Concentrators from the 1970’s looked like console television sets.  They weighed a hundred or more pounds and were bulky.  They also used a lot of electricity and had no battery backup.  Medicare (and insurance companies) took a while to catch up to the changing technology and some of the first companies providing these oxygen concentrators enjoyed reimbursements from $300-600/month.  At that rate, the medical equipment provider could provide backup cylinders.  Many companies also sent out a respiratory therapist for a monthly visit.  These clinical respiratory visits became an industry standard in many parts of the country.

As time went along, through the 1980’s and 1990’s, concentrator technology improved rapidly.  Concentrators became smaller and more efficient.  Battery backup features were added as “portable concentrators” made their way to market in the early 2000’s.  Unfortunately for many companies, as the technology advanced, the reimbursement declined.  Several severe oxygen reimbursement cuts took place in the last ten to fifteen years, and competitive bidding has reduced it even more.  Today, reimbursements of less than $100/month are not unusual.

While the reimbursement picture is not “pretty,” the good news is that sleeker, lighter, and more efficient units show up every year.  It is now safe to take one of these portable oxygen concentrators on commercial airplanes.  The latest trend along with keeping the size compact is to include monitoring capabilities to the units so that patients can be monitored remotely.  Home oxygen therapy and telemedicine have merged and old model of monthly checks and weekly deliveries is a thing of the past.

While the industry faces significant challenges with regards to payment and reimbursement for these units, the current systems allow patients to continue a very active lifestyle on oxygen and have undoubtedly improved the quality of life for many patients.